A conundrum exists within music today. Generally, whenever music becomes more complex or unorthodox in composition, the less likely the average person will listen to it. However, if a composer or musician doesn’t have a unique musical “sound”, then they’ll lose any potential for having any meaningful musical impact.

I can’t say that music labels are aware of this conflict, and I can’t say that this drives  current popular musical trends. However, a study  was done that shows current popular music is becoming increasingly simpler and even less creative in it’s song structure, chord choices, and overall uniqueness. I can attest from personal interactions with musicians, that the fear of being overlooked musically, outweighs the motivation to broaden their musical spectrum.

Before I continue, I do want to make sure that I emphasize that I am not against current popular music, and I do indeed like some of the new music hitting the airwaves.

However, I do believe that if current music stays overly simple, repetitive, and uninspired, it will continue to have a negative affect on all music genres. What I mean by this, is popular music is obviously at the forefront and most widely advertised of genres. It gets the most listeners, hence it is popular.

Many films, tv shows, internet content, commercials etc.. are being produced by people who mainly listen to popular music. They want composers/artists to sound like popular music, which is becoming less and less interesting musically. As any relatively smart musician knows, you follow the trends to make money, therefore as it stands, all genres are suffering from this trend to some extent.

Now I am not trying to proselytize how a person needs to compose music, nor am I the decider of what is good and bad. What I am pointing out is, if current music was an ice cream shop,they’d only be serving chocolate and vanilla. Not that there’s anything wrong with chocolate or vanilla, but it would be nice to have some different flavors to choose from.

This brings us to our focus of this article. I think a good way to add some variety to a composition, without totally re-hauling how one writes, is with the use of tensions. It can help a composition stand out from the herd, and yet still retain founding elements of the song. For those of you who already use tensions, this may be a nice refresher.

Tensions are the leftover notes from a chord scale  that aren’t needed to define the quality of a chord (major, minor etc..) but help add to it’s aesthetic. An analogy would be that, a painting doesn’t need a frame to be understood or enjoyed, but a frame could help enhance and add to it’s beauty.

Also, due to the different combinations of tensions that can be added to chords, there’s very little chance that every composition would sound the same if everyone used them. In fact, many many many musicians from every genre of era’s past would often use them. I’m hoping it makes a resurgence.

Let’s get into the explanation of what tensions are and the simple rules for applying them to chords. Some of the material below may be unnecessary for more advanced musicians, however, it needs to be addressed for a full understanding of the material.

We first need to explain where chords come from, to understand how to apply the appropriate tension to them.Chords are derived from scales. Scales are a set of musical tones ordered by a fundamental frequency or pitch. I talked about this in my post titled Chord Progressions, but basically Pythagoras figured out how a pitch or frequency occurs and innately orders itself within nature. This natural ordering led to the creation of scales.

Western tonal harmony uses scales to derive chords. Chords are determined by “generally” selecting every other note within a scale (or in 3rds) to form what is called the chord tones.

Numbers 1,3,5 &7 are assigned to each chord tone to delineate it’s position and function. The number 1 is in reference to the first note of the scale you’ve chosen, the 3rd is the 3rd note of the scale and so on. I won’t list them all, but a few of the abilities the chord tones can tell the ear is: if the chord is minor or major, if the music is resolving or continuing, and it can also be deceptive and mislead the ear as to what direction the music is going.

Tensions are the leftover notes in the scale that are not necessary to define a chord, but can be used to enhance it. Tensions are “generally” placed in the higher register of a chord because they are a continuation of the 3rd pattern used to form a chord. It also helps to separate them from the chord tones, so they don’t cluster together and confuse the ear. That is why instead of calling the tensions 2,4,&6 they are looked at as ex-tensions 9,11, and 13.

Not every tension that is diatonic to the scale is available to be used on all the chords created from the scale.

Two of the reasons you would want to avoid using certain diatonic tensions are:

For the sake of not overwhelming this article, (because there are lots of scales to cover) we’re going to concentrate on 2 scales that will cover most of the known western tonal chords and their tensions.

They are the major scale (ionian), and the melodic minor scale (which in my opinion is the only minor scale you need). These scales have individual formulas that are just different patterns of whole steps and half steps of notes put together.

If we take each note from this scale and treat them as the root of a chord we can build unique chords just using the notes that are available. To reiterate, Western tonal harmony is based on 3rds, so starting on the second note of the scale and building a chord off of ‘E” we would get E,G,B,D. We would continue this pattern for each note of the scale.

In the above example, each chord from the “D” major scale only contain the 1st,3rd,5th and 7th notes of the chord and each note is diatonic to the key.

The “maj” & “m” obviously also indicates that the chord is either major or minor. The 7 at the end indicates that all 4 chord tones are present within the chord.  If the roman numeral is followed by just a 7, like “V7” then it indicates a dominant 7.  The circle with the slash indicates a half diminished chord.  However, the best way to determine the quality of the 7th is by referring to the chords scale.

Now that it’s been explained how to create the scale and the scales corresponding chords, it’s actually super easy to know what tensions are available and easy to remember what they are for the major scale.

(If you see a “#” or a “b” by a tensions interval, you may be wondering why that it is since the tensions are diatonic for this chord scale? For example, the #11 in the IVmaj7 chord is C#, which is diatonic to the key, but it is a #4th from the root of the chord “G”. That is why it’s a #11. The qualifier of a tension is always in relation to the root of the chord, which is innate and obvious, but still deserves mentioning.)

Now that I’ve given an idea behind how scales, chord tones, and tensions are chosen, using the major scale, we can apply the same technique to the melodic minor.

The melodic minor scale is unique in that its ascending pattern is different then its descending pattern. One of the reasons (and there’s a few) behind the different patterns, is because the V chord in a natural minor scale, doesn’t have a tritone in it. This doesn’t allow for any resolve/resolution when composing music with it. Music composed without a dominant V, would sound nebulous and unresolved.

The melodic minor scale fixes this problem by adding a leading tone (or major 7th) and a major 6th (to avoid an awkward minor 3rd leap to the 7th) on the ascending pattern. Then the natural minor scale returns with a minor 6th and minor 7th on the descending pattern which is how the scale naturally occurs when derived from the major scale. These 2 different ascending and descending patterns allow for the best of both worlds. It’s formula looks like this ascending W,1/2,W,W,W,W,1/2 and W,W,1/2,W,W,1/2,W descending.

Here is what the melodic minor looks like with all of it’s available chords and tensions. 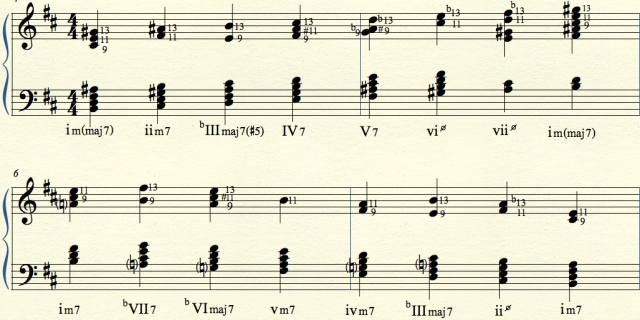 Hopefully the example above doesn’t look overwhelming. If it does, then let me reassure you that it’s actually not that tough to remember and come up with the available tensions for the melodic minor scale for all key signatures.

Here’s how it breaks down.

This last paragraph sums up everything I’ve written about in this article very simply. All chords from the major scale and melodic scale use tensions that are a whole step away from the chord tones 1,3,&5. The exceptions are for the im7,iim7,and ivm7, because the 13th causes the chord to sound dominant when used. Also the V7 of the melodic minor scale gets to use b9,#9, and b13 because the chord shares more in common with a diminished 7 chord then a dominant chord as well as those notes are found within the melodic minor scale.

At the end of the day, all available tensions do not need to be used on every chord. They can be used sparingly, and still add a lot of more interesting tonalities, than what’s currently heard in music today. Hopefully I’ve explained it well enough that it will indeed help someone use them in their composing and bring more diversity and uniqueness to ones music.

I’m a big fan of cryptocurrencies. Most specifically Stellar Lumens (XLM). If you’re a fan of Stellar too, and found my information to be helpful, then let me know by sending some lumens.