If you understand counterpoint, you’d know it was developed mostly during the Renaissance as a way to create individual interesting musical lines within a SATB framework. Essentially each voice of a piece would support the harmony of the composition, yet their contour and rhythm could be totally separate or independent of each other.

This technique’s creation can mostly be attributed to the genius efforts and works of J.S.Bach. His rhythms and direction of each musical line or voice, often times worked independently, yet harmoniously together. In many Bach compositions, if you separate and view each voice independently,  it could appear that the individual musical line did not relate to the other voices of the composition it came from. He was a master at creating lines  and melodies that worked “interdependent” with each other.

Now before you start to think this is going to be a rehash of the multitudes of material written about Bach’s technique, let me put you at ease. This article will attempt to explain and convince you why this age old technique is still important. Additionally, I will also talk about a few  counterpoint  fundamentals that I’ve adjusted and put my own spin on, to be used for todays musical tastes.

Music today has obviously evolved beyond Baroque style composition. Nonetheless, I believe that a basic understanding of counterpoint is needed by composers of ALL GENRES (some styles more than others) to avoid the trappings of compositional repetitiveness and mediocrity.

Although I haven’t heard every single new piece of music recently released, for the most part, current music (again all genres) can be analyzed as  homophonic!  This is not to say that homophonic music is wrong or bad, it’s just overwhelmingly ubiquitous. Ironically, many of todays singer songwriters/composers, who don’t have strong harmony and counterpoint in their works,  often cite artists who did as their influences. Again, as I’ve mentioned in other posts, fresh inspirational ideas are the only thing, in any field really, that will sustain you in the music industry. Learning as much as you can from every source available, is necessary to flourish.

There is an anti-establishment belief in the music world, that studying music theory  will overly influence your musical choices, or just make you sound like everyone else. As much as I applaud the desire to break from the norm, I argue that you cannot break free from what’s commonplace, until you learn what that is. This is analogous to: if you do not know history, you’re doomed to repeat it.

Many new genres of music have been created over the last 100 years. Most of the prominent figures who developed those styles, worked,studied, and learned all they could to go beyond what was ordinary. I can refer to a famous painter and a composer as examples.

Pablo Picasso could literally paint anything. In fact he was so good at painting what everyone deemed masterful, that he became bored and invented a whole new category of art. (Cubism) The same can be said about Arnold Schoenberg. He could literally compose any tonal music of his day. However, he wanted to create something different than what was commonly composed, so he developed atonality.

All music that is heard today (except for Aleotoric) is based on how frequencies do or do not order themselves in nature. (*See my article on Chord Progressions for more detail about the nature of notes.) Whether you’re composing tonal or atonal music, it’s necessary to know what the natural characteristics of  intervals are, and how they relate to each other.

Many years ago, it was determined that different intervals from either major or minor scales, had different degrees of strength or resonance. Basically some intervals of a scale dominated or could be heard better than others. The two most dominating of these intervals are the 5th and the Octave. This natural occurring phenomenon drove composers to figure out a way to counteract this effect.

Counterpoint is the system that allows all  intervals to be more balanced and heard within a composition. There are many techniques to be utilized from counterpoint, but I am only going to focus on 3. These 3 rules have been adjusted by me and are based upon traditional counterpoint.

My adjusted rules do not stem from a place of arrogance. I do not assume to know more than music scholars with years of experience. I have merely analyzed scores of noteworthy era defining composers of “recent” years and have observed that these are techniques that they used in their compositions.

Most of these adjustments I’ve made are based upon the Neo-Classical era. I feel it is the birthplace of modern music. Stravinsky was one of the more notable, if not most notable, composers of that era. He influenced everyone from Leonard Bernstein to Frank Zappa as well as many others. I am not disregarding the music that came before the Neo-Classical era, it’s just that during that time period they really threw out convention and literally caused a riot in doing so. Moreover, I believe these 3 adjusted rules below, can be applied to any genre and they will enhance a composition.

There is an additional “rule” that needs to be mentioned, but I personally believe it’s more of an important guideline. When composing a melody, it’s best to not make large interval leaps between notes. This increases the difficulty for it to be performed from everyone playing the piece.

However, it really depends on who you’re composing the music for. At the end of the day if you’ve composed a melody that you feel is inspired and the people who are performing it are capable, then do it.(Mozarts Queen of the Night in The Magic Flute is an example of this)

Just keep in mind that it’s not something that will always sound great, as well as be welcomed by your performers. This guideline is a rule in most counterpoint text books to ensure a successful composition. It really takes some finesse and experience to pull off large interval leaps successfully  in a composition, and for it be regarded as noteworthy.

Okay, now that we’ve gone through the rules let’s explain what they mean.

An example would be if you have C & G in the bass and tenor voice of a chord, moving to  D & A that are also in the bass and tenor of the next chord. You do not have to worry about parallel 5ths or 8vas if your chord isn’t changing. If you are repeating the same chord over and over, you don’t have to worry as that is acceptable too. Also, if you’re doing inversions of the same chord over and over this rule need not apply. Below is a  diagram of some of the different ways 5ths and 8vas can be encountered when composing. 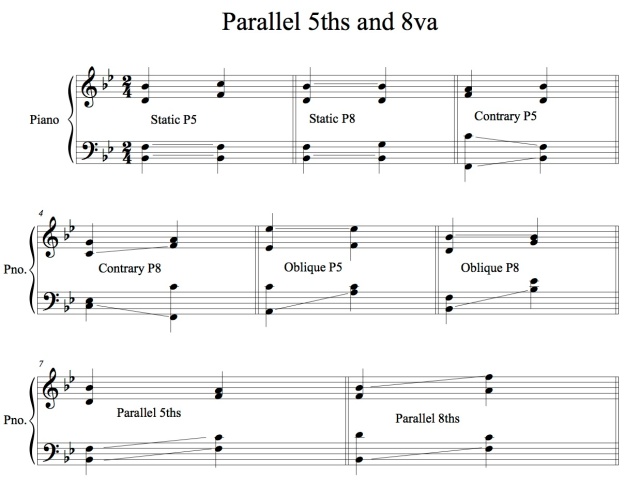 The examples above are just that, examples. These types of parallels can occur in any voice in any number of configurations. It takes practice to avoid an imbalance of sound. Here are possible solutions. 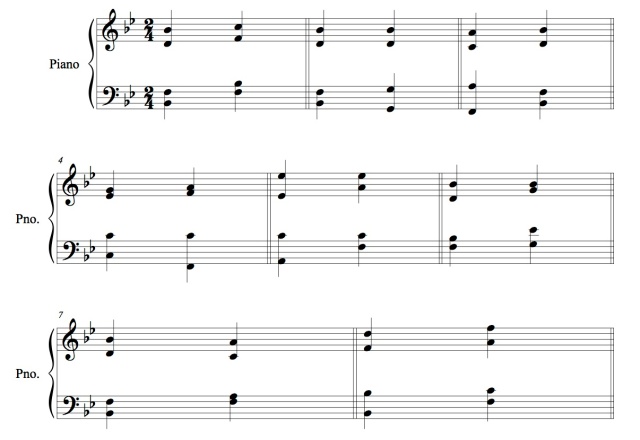 When doing counterpoint the tools you have to avoid dominating parallels include:

With all that said, consciously choosing to use parallel 5ths and 8vas can be likened to breaking the 4th wall in acting. If you are consciously choosing to acknowledge the audience during your performance, and do so with confidence, it can be received really well and even enjoyed. If you are accidentally acknowledging the audience in your performance, you can be regarded as… well not so great. The same can be said for using parallel 5ths and 8vas.

Every single genre of music has exemplary examples of parallel 5ths and octaves that work really well in a composition.  I think that they absolutely have their place in music today. Nonetheless, they need to be padded by strong harmonizations and counterpoint. I think using parallel 5ths and octaves should be saved for parts of a composition other than a chorus of a song, or a climatic section of score. Those sections will shine much brighter if arranged in a more fundamental way. This technique lends itself to making choruses, or climatic sections sound even bigger. Since most genres other than the Pop/Rock realm require, some knowledge of arranging/counterpoint, I will just point out where the Pop/Rock genre would benefit most by using counterpoint. Pop/Rock (or any of it’s offshoots) genre would be greatly enhanced if they used counterpoint in their background vocals, keyboard/synth parts, and especially in the bass lines.

Okay let’s put all this material together to demonstrate how its used for an actual piece of music, and not just exercises.

Here is a piece I composed where the violin has the main melody and the viola, cello,bass have secondary melodies, supporting harmony and mostly interdependent rhythms. 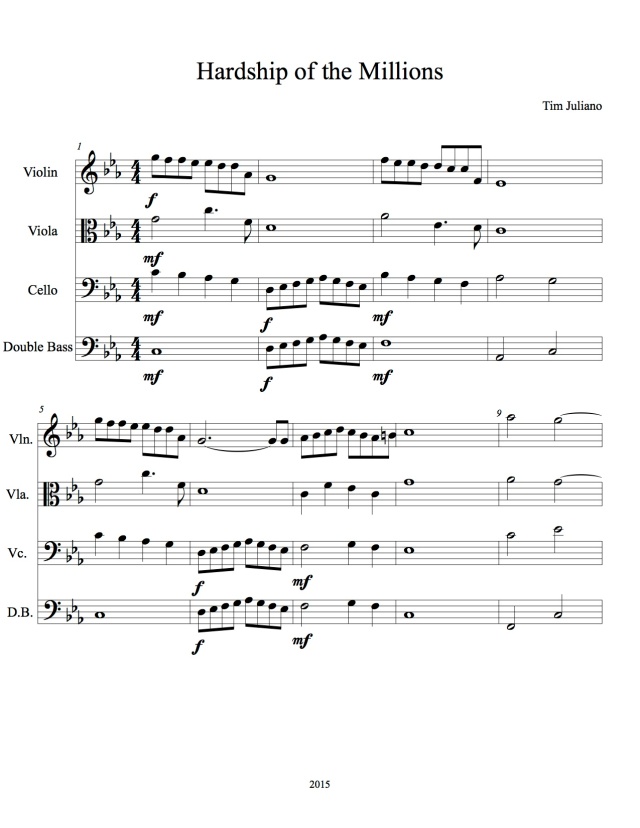 In traditional counterpoint and harmony, I would be scolded for measure 7 as I have parallel 5ths moving between the 3rd and 4th beat between the bass/cello and viola. If you want to get really technical, I also have err’d on the 4th beat of measure 7 with a minor 3rd interval between the “A” and “B natural” moving to the tonic in the violin.

You see, I’m not trying to stay strictly adhered to the rules of counterpoint. However, traditional counterpoint really allows for a strong harmonic, and melodic foundation that will support the overall integrity of the piece. Moreover, I think an individuals voice benefits from learning the fundamentals, taking the best parts from them, and then adding to or creating an entirely new idea upon it. With time, a unique, solid, and creative idea will emerge.

I’m a big fan of cryptocurrencies. Most specifically Stellar Lumens (XLM). If you’re a fan of Stellar too, and found my information to be helpful, then let me know by sending some lumens.